I’ve been stewing for about a day.

I did not go to Build Conference.

Once I figured out that WinRT is for Metro style apps and ONLY Metro style apps, and I tried to make a call from a .NET 4.5 app into a very simple “GetUserInfo” WinRT API and it threw an Access Denied Exception, I was upset.

Then I realized something.

This is not just a new way to program on Windows.

It is also not THE new way to program on Windows.

Microsoft is segregating their application types on purpose. Metro style apps and WinRT is not about “the next windows”. What was shown with the hybrid classic desktop and the new Metro UI is NOT the future vision that MSFT has for Windows. It is a transition.

This is why that line between WinRT and .NET/Win32 has to stay thick and hard. There will be no hybrid apps. That ruins the vision.

Imagine a thick wall between the light blue and green.

Microsoft knows that it has to participate in a segregated market. They won’t be selling $100 Windows Professional licenses to OEMs of $300 tablet devices. The $10 license of Windows Started Edition is more like it. (I’m guessing at OEM costs.)

The operating system has to run fast on low power hardware. Any applications which run on it have to run on all the better and faster hardware, right on up to $5000 laptops. The Metro style along side classic desktop fits this mold.

Talk about shaking things up! What if that were the first 3 sentences of the Build keynote?

Watching the developer reaction to Metro style and WinRT has been both depressing and comical. I suppose its like watching anyone else learn something from nothing. We can get it very wrong at first. It is part of our learning process.

I know I’ve not figured what the existence of WinRT means for .NET or what I can and cannot do between WinRT and.NET4.5. I’m also not sure what the difference is between Metro style and WinRT. It sure seems like there are some cool non-UI APIs in WinRT that I might want to use from .NET. I sure hope that I can.

Looks like I can do the above when I say use some WinRT from .NET4.5. Cool, because those file pickers sure are pretty. http://ermau.com/using-winrt-from-net/

Doug Seven has an excellent post detailing what is being released and how it fits: http://dougseven.com/2011/09/14/i-know-what-youre-thinking-and-youre-wrong/

Take a look at this slide from the keynote:

I’d like to speculate about a couple things related to this picture.

Considered from the point of view, very few of us Line of Business app developers will be writing Metro style apps. They are not meant to replace all desktop apps. You will not see Office apps like Word, Excel or Powerpoint built as Metro style apps. They will likely get some theming that is Metro influenced, but they will still run on the traditional Windows desktop and not in the Start Screen. That said, there might be augmentations in the Metro style apps. After all, Windows on a tablet is far more usable with Office. So I think you will see stripped down, touch optimized, Metro versions of Word, Excel and Powerpoint. The use case for these will be “when you aren’t at your desktop or laptop".

Believe it or not, there was actually announcements around Azure and ASP.NET yesterday. You’d never know it given all the focus on WinRT. I’m super excited about the new async support for controller actions in MVC4. I also think Azure’s replication story around tables and blobs is pretty sweet now.

So much more to come. Its an exciting time be a developer. Just try to remember that ships often look like they are sinking when you see them far off the horizon

Nothing has changed, and this is a good thing.

Here is what I took away from yesterdays keynote:

Watching my own twitter feed was rather comical. Everyone seemed to be hearing exactly what they wanted to hear. Sometimes it was the opposite of what I thought I just heard.

There are still lots of unanswered questions, but I’m sure that in the next few days these will all be answered via sessions and blog posts containing the content of the sessions. I’m surprised people aren’t more patient. I’m actually seeing a bit of FUD email and tweets asking questions that should be answered by the end of the week. Be patient.

I just got back from the Michigan Loco Ubuntu Global Bug Jam at SRT Solutions in Ann Arbor. I can safely report that Ubuntu 11.10 Oneiric Ocelot is a very nice Ubuntu Linux release which smoothly upgrades from Natty Narwhal. Admittedly, my Natty install didn’t have much customization to it since I had upgraded it from Lucid back in April.

After the upgrade, I worked with John S. Gruber on confirmed a Lernid package that he had put together with some new features. I ran into a nasty desktop couch bug that it seems has been tracked back to Erlang, but luckily, it just meant that my settings weren’t persisted. I was still able to test out all of the Lernid features that John wanted to test. I’ve always been interested in Lernid and I really appreciated the opportunity to help out. I also liked seeing how the –config option worked. Also, the new slideshow command that uses a url to push a slideshow down to clients from the host/instructor is pretty cool. Its an interesting feature and shows where the program might be going in the future. 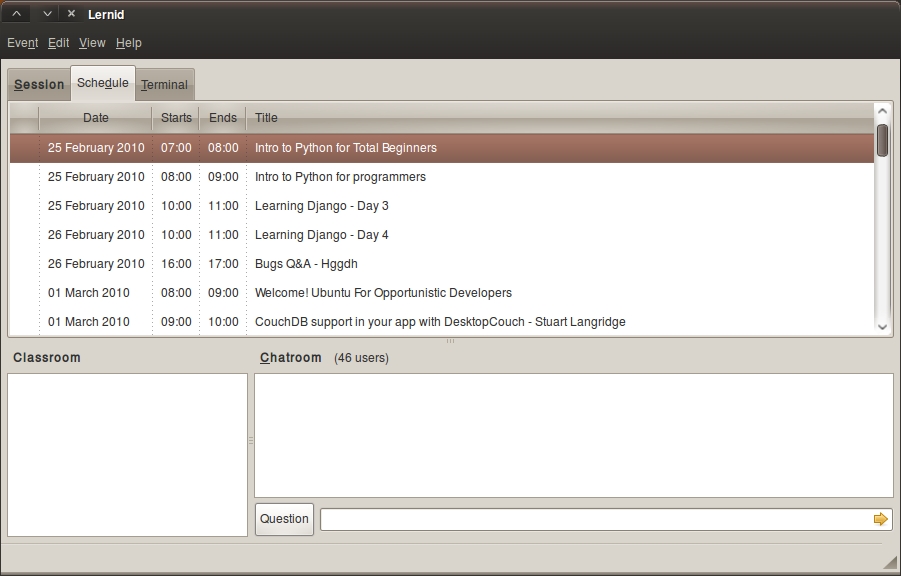 Once I’d learned enough Lernid, I decided to focus on some things that I wanted to make sure worked. I did an apt-get install mod_mono and monodevelop. I’m extremely excited about this ubuntu release. For the first time in years, Ubuntu is shipping a reasonably modern version of Mono. I was able to get an ASP.NET MVC application running in MonoDevelop in minutes. Note that this includes the download and install of the mono runtime and IDE. To do the same with Visual Studio would take hours. MANY hours if you include installation of VS2010SP1 on top of VS2010. After that, I tried hosting the asp.net mvc app in Apache. I didn’t realize that someone had written an apache config front end. http://go-mono.com/config-mod-mono/ This let me type in a few things and have my application hosted in no time.

I guess that was about it. After we cleared out of the SRT office, I handed off the Amiga 1000 that has been with me for 24 years to our Michigan Loco leader, Craig Maloney. I’m a little sorry to see the Amiga 1000 go, but I am not the type of person who will resurrect it. I think it has found a nice new home with Craig.